Hey guys, I figured it was well and truly time for a catch up, so grab a coffee with me.

So the last few months have been kind of hectic. I hit 90k words and finished the first draft of my current MS, which is super exciting. I also attended the Salisbury Writers’ Festival which I think Lauren Rose is doing a blog on, so goodie. Among all of that though, I realised how little I was involved in the community. Like, yeah, I read a bunch and review stuff and leave feel good comments on twitter and my bookstagram that I run with Lauren. It still doesn’t feel like I’m participating enough. I want to know people, to help people.

I’ve decided on two long term projects that I plan to get up and running because of this (well, three, actually!) You might have already noticed some ‘under construction’ tabs in my menu, too. While I’ll be submitting to more anthologies as well as writing in general more, I’m going to be opening myself up for some critiques after some fantastic feedback from current pieces I’m working on. So I’ll be sorting all of the details for that in the near future. I’ve also decided to do a mental health and writing podcast. MH is something that I am a strong advocate for, and I feel a lot of people use writing as a way to deal with stuff, which is great, I do too. I want to be able to engage and actually connect and let people know ‘hey, it’s OK to feel crappy’. Mental health issues aren’t a death sentence, but they do need some help navigating, and I feel like I have enough tools now to help a bit. So I’ve been looking into outlining some episodes and stuff- tell me if there’s anything you’d like to hear. Finally- I started a wattpad for the stories that I maybe don’t feel as confident about, or that weren’t shortlisted. I don’t want them just ~sitting~ there, so I hope someone enjoys them at least!

I think that’s everything I wanted to chat about/update you all on. It’s weird- my mental health is probably the best it’s been in many years, but I’m trying to be over eager about stuff again and I wear out a lot. I used to take on way, way too much and I burned out hard, and it’s weird to recognise those red flags and be able to halt. All you can do is try, and that’s what I’m going to do- try to the best of my abilities without making myself sick. 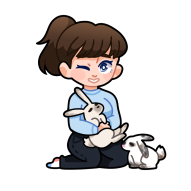 Warning: this blog is different to normal and contains spoilers. 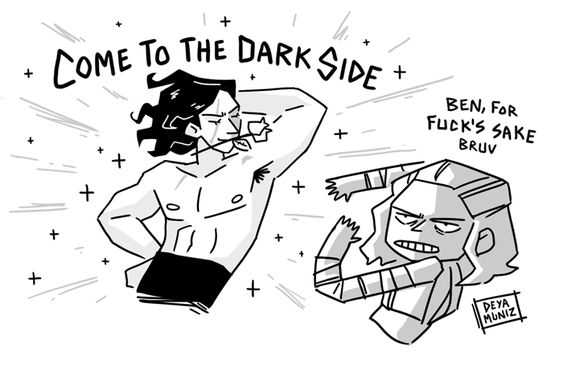 I was a little girl when the prequels came out. With older siblings that had been born in the seventies, Star Wars was a thing in our house. I had vague memories of it- of a giant Jar Jar Binks statue in the local KFC that scared me, of fighting over Darth Vader Pez dispensers with my older sister. I remember Star Wars, of dashing Han, of Luke and his strength, of the beautiful Princess. It wasn’t until I was an adult that Star Wars clicked with me.

I went to see The Force Awakens on a date, and after that showing, I was obsessed. It wasn’t because it was a new Star Wars, or that I was old enough to properly connect. No- it was because of Kylo Ren.

Now, a lot of you have probably heard people trash on him. I hear it a lot. “He’s such a cry baby”, “he’s more poorly written than Anakin!”, “all he does is whine”. When I look at Kylo, I see a character I relate to. Someone that struggled with rage, who has this idea of who and what they should be shoved onto them from a young age, who has to battle with what others want of him versus what he actually wants.

The Last Jedi was particularly powerful to me. After seeing how scared he was at the idea of killing his father, of the weight of becoming a Sith, a Darth. Then the fear in his eyes, the sheer loneliness, when he couldn’t pull the trigger to kill his mother. You could see the love in his eyes, in his heart. He’s portrayed as this angry, hateful person. You know what makes people angry and hateful? Scared, confused children that don’t have people around them that pay attention. Rey and Kylo are so alike in that regard- different families, similar results. I feel for him. I feel for his character, and my heart breaks for him.

Don’t be afraid of the expectations of others. Do what feels right to you.

I bet a lot of you have, or know someone with a mental illness. There are so many out there to choose from- it’s like Honeydukes up in this shit with the beautiful varieties and concoctions of illnesses. PTSD, anxiety, depression, bipolar, eating disorders- so painfully many, and they just love to hang out together in little bitchy cliques.

What does this matter though? Well, if you fit into the people above that have to deal with mental illness, you know it fucking sucks. You might not wanna eat, you might wanna die, you might be so unstable with your emotions that you don’t sleep for three days and your room mate has to threaten to knock you out with a bat. Mental illness affects every day life, and even good days can be a struggle.

I myself have been diagnosed with BPD (borderline personality disorder), PTSD, anxiety and depression for literally a decade now. It has had its bouts of good and bad, but for the most part- it’s been bad. I struggled to get through University, I made bad decisions (none of them as bad as Lena Dunham’s entire career, but still fairly catastrophic).  I’ve learned a lot from this- mostly, that I needed help. To also cut myself slack.

I struggle with the slack cutting. A type A, J personality type to the max, I want to be and have to be the best. Which means a lot of the time my fear of failure or not achieving the standard I want for myself means…I get nothing done. My illness literally sits there, flipping me off whilst mooning me.

So today is a pep talk to you, me, and everyone else out there- it’s alright to mess up. It’s fine to not do your best. It’s not fucking fine to not try at all. So haul your ass up, turn off Netflix (I see you, I see you), and get to work. We’re not gonna let each other down.