It’s the third Friday of the month, which means one thing- it’s my review day! (Two months in a row makes a tradition, right?). This blog is actually coming to you from January- I got my preordered copy of February’s debut novel early and of course I couldn’t help myself.

This month is Keeper by debut author, Kim Chance. Set in the sleepy town of Lothbrook, down in the south, not a lot happens here. Lainey Styles is a brilliant girl, intent on getting into a good college early to make her mark on the world as a scientist. Unfortunately for Lainey, the mark is made on her instead when a 200 year old witch launches Lainey into the ultimate and most confusing journey of her life as she discovers that nothing in her life is as it seems.

Now, if you’ve actually read previous blogs (which not a lot of people have, so I don’t blame you!) or follow me on social media- I freaking love Kim. I stumbled onto her channel on youtube just before Keeper was picked up for publishing and I fell in love with her and her book. She’s genuinely so wholesome and sweet, I get a toothache every time she tweets. I admit, this means I might seem bias, but I promise I will actually do my best to be objective and offer some insight into Keeper.

First things first, I did post a small Goodreads review as SOON as I finished reading, and admittedly, my heart had just been torn in half by the ending of this book. I admit, I was more impressed with Keeper than I thought I was going to be. Kim’s background as an English teacher as well as being passionately adorkable is what set this book over the edge. 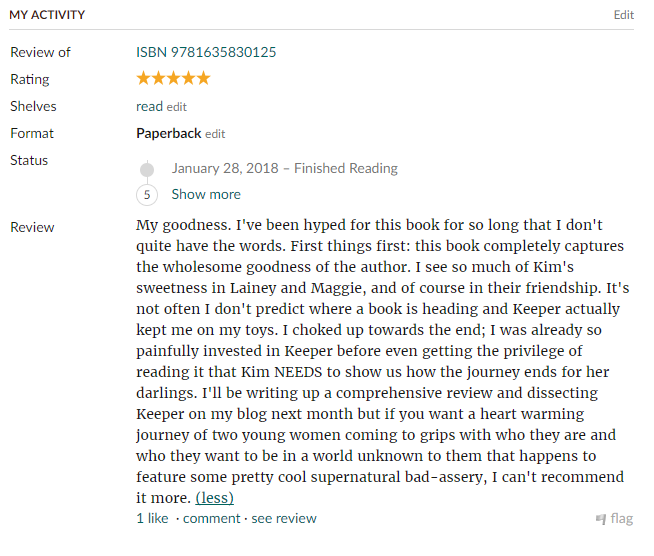 Kim’s characters are so vibrant and realistic. My favourite part of the book is definitely the friendship between Maggie and Lainey- it reminds me so much of my own best friend and myself and it is so precious. They’re all very three dimensional, with flaws, as well as moments of cringe. What might be taken as bad writing choices in other scenarios, these moments actually added humanity to her characters. Like Maggie’s obsession with pop culture and comics- it might feel off-putting if this was all Maggie was, but her little monologues are cute, and a huge tell of how she processes the world around her. It’s also a nice contrast from super logical Lainey, providing a balance between them.

There are so many good flaws amongst the characters. Their willingness to see the good despite the bad, Lainey’s inability to process her emotions because she’s so used to her barrier of logic. The complete and absolute shade that is thrown at us at the end of the novel too- I didn’t call any of that. I spiraled hard.

While I do wish this was written for a slightly older audience, I think a lot of reviewers have missed the point that this is a YA paranormal novel and that is a bit sad to me. For it’s genre and how it’s written, it’s a pretty fantastic, Harry Potter-esque read.