Hey guys! Sorry for the delayed post today; it’s been a long week for me.

To start with, I finished Nanowrimo this year. I actually hit my goal early, on day 23! As you can see though, I didn’t hit my 60k Novemember goal…at all. 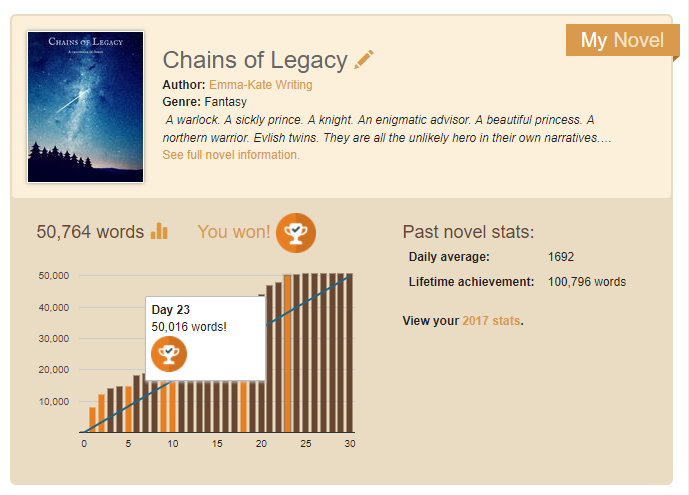 This is because like the day I finished/day after, I got sick. Crazy sick. I’m still ill, in fact. I’ve been sleeping 12 hours some nights, barely moving, feverish and the works. It’s been a blast.

I’m also late to update because of exciting news! I’ve been volunteering for the SA Writer’s Centre and we had an end of year party last night, and unveiled the new logo and name for Writer’s SA. With 2017 being the 30 year anniversary of the Centre and wanting to be about the greater South Australian writing community, they moved location and have set up some beautiful ideas. I’m so proud of all their hard work! If you’re South Australian like me and not already a member, maybe you should head on over and join already. They also relaunched the site last night and it looks amazing, and I’m so grateful to see their excitement firsthand as they unveiled it.

Now that Nano is out of the way, I’m determined to put extra effort into the content I produce online as well as my actual writing, so I’ll be undertaking a few new developments towards my blog and social media in the upcoming new year. I’m still ironing out the kinks, but I’m pretty excited and hoping it all goes nicely.

Now that we’re in the final stages of 2017, I’m looking forward to making 2018 much more productive.